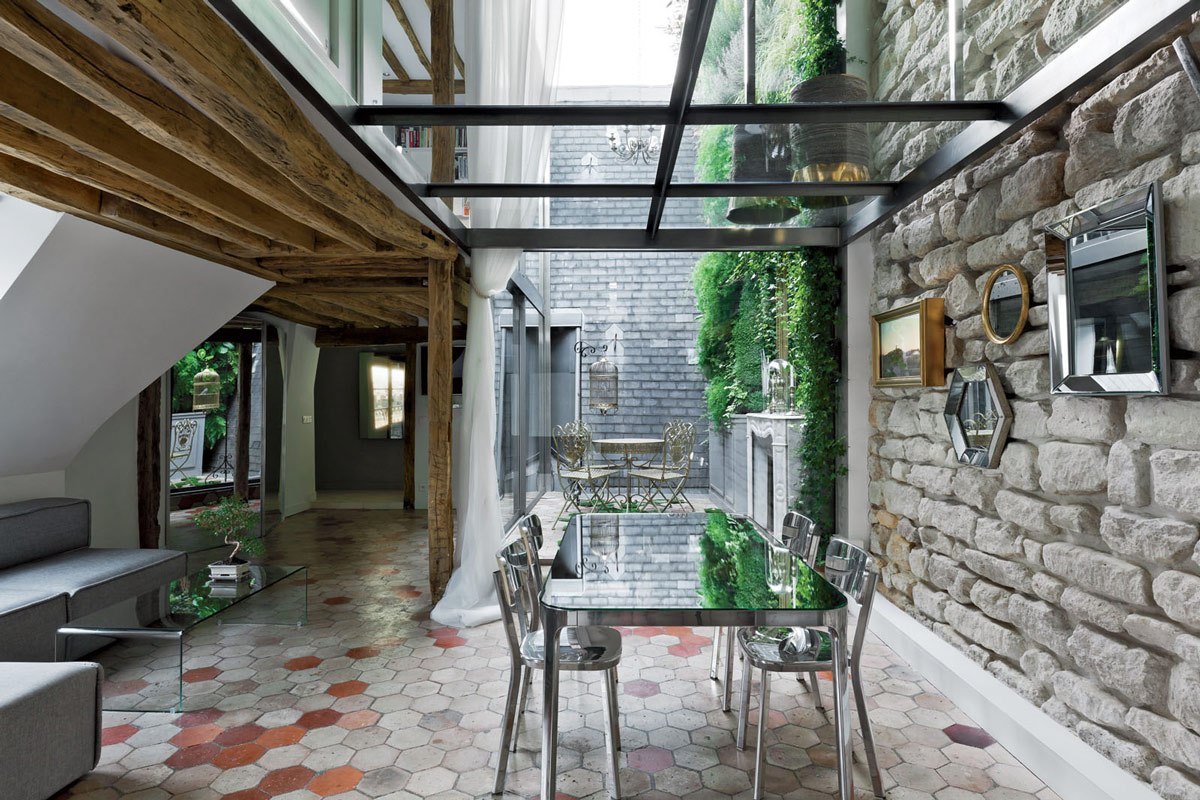 Apartment Madeleine was completed by the Paris based studio Ateliers Michael Herrman. This project included the renovation of a duplex apartment in an 18th Century building. The 1,500 square foot apartment is set over two floors, the interior beautifully combines rustic and modern elements.

A fabulous glass floor sits above the dining space, allowing the abundant light from the glass walls to pass through the living areas. The apartment is located in Paris, France. 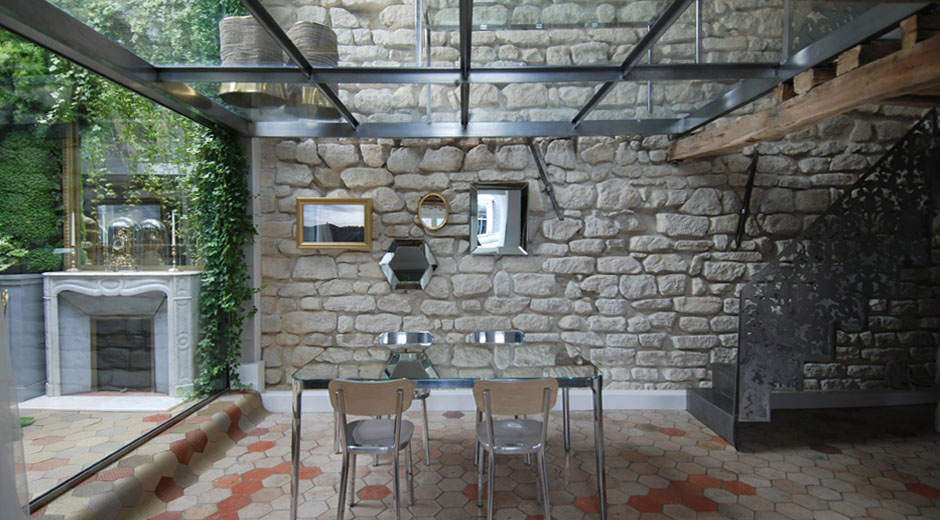 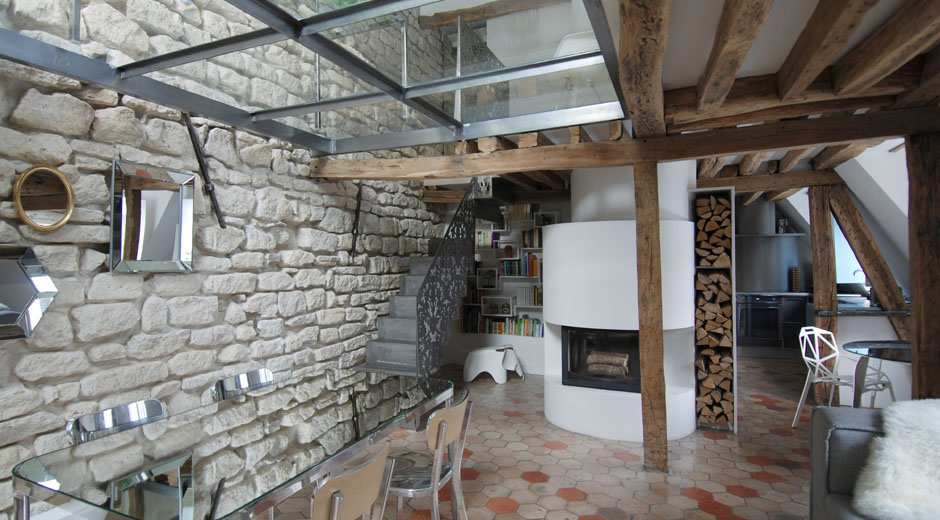 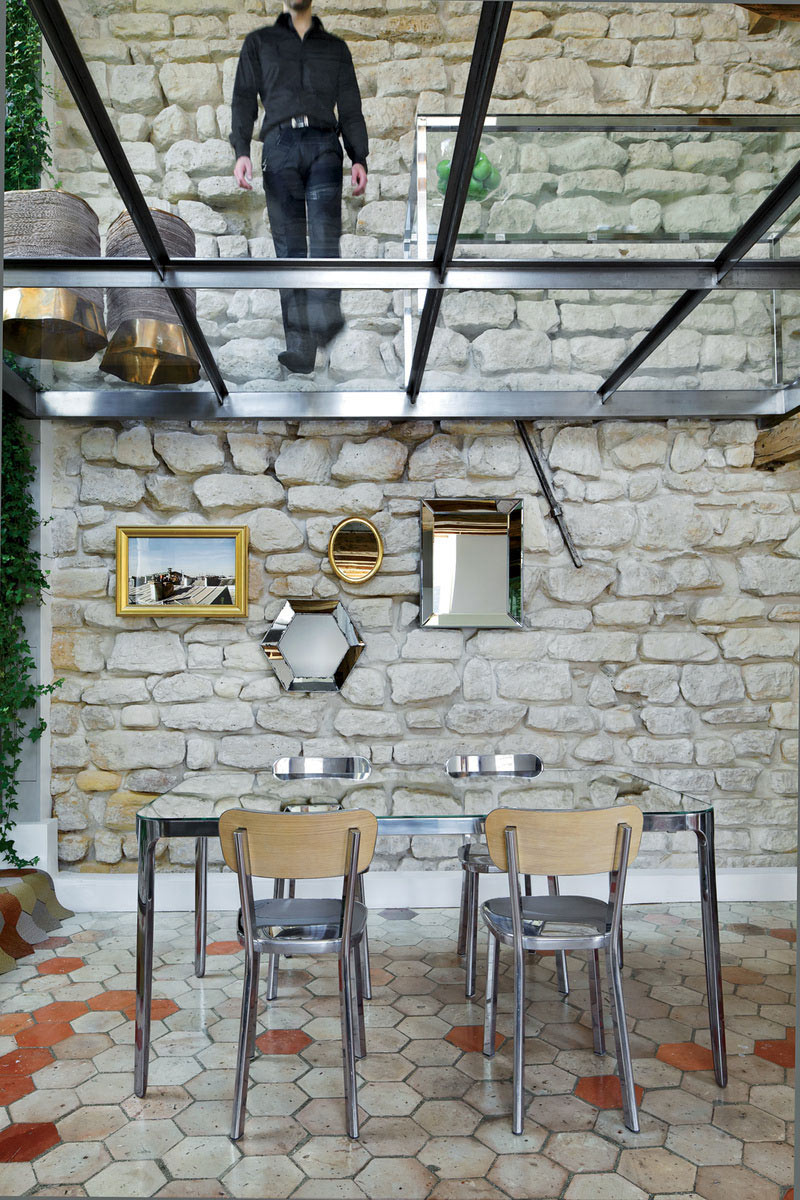 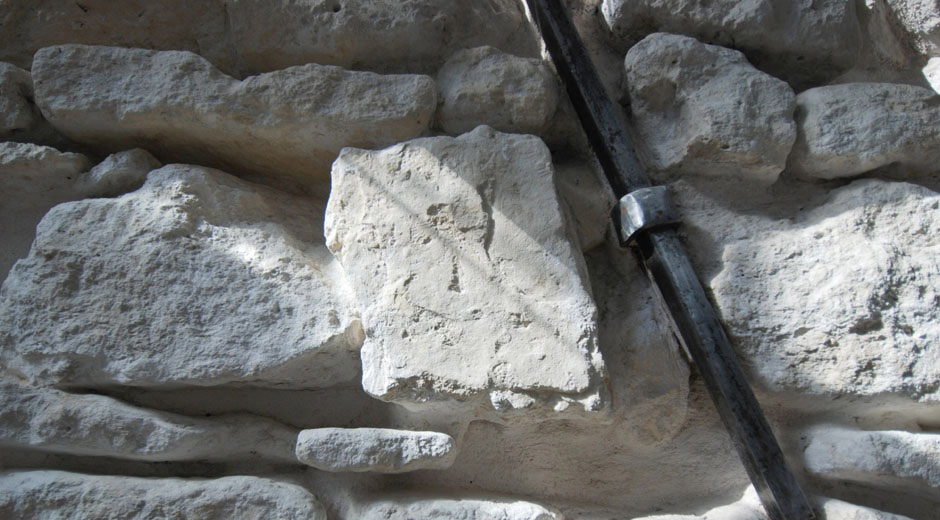 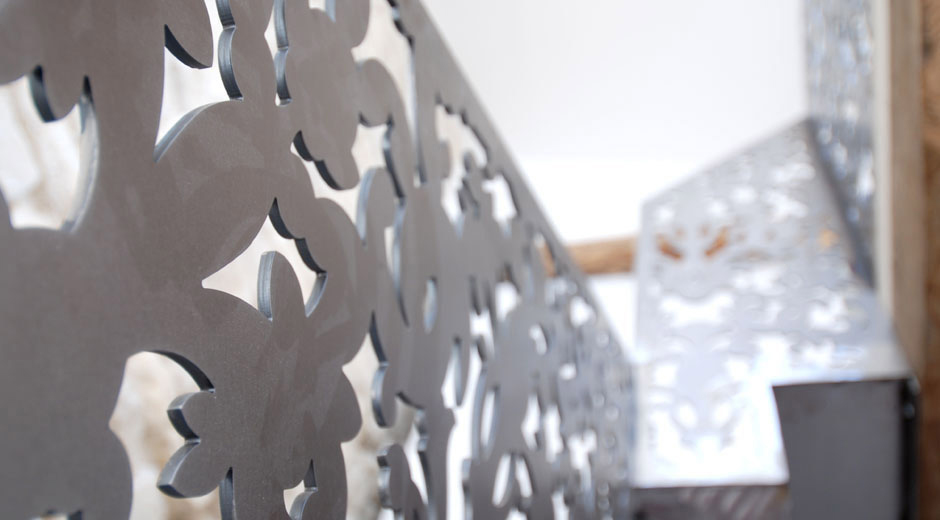 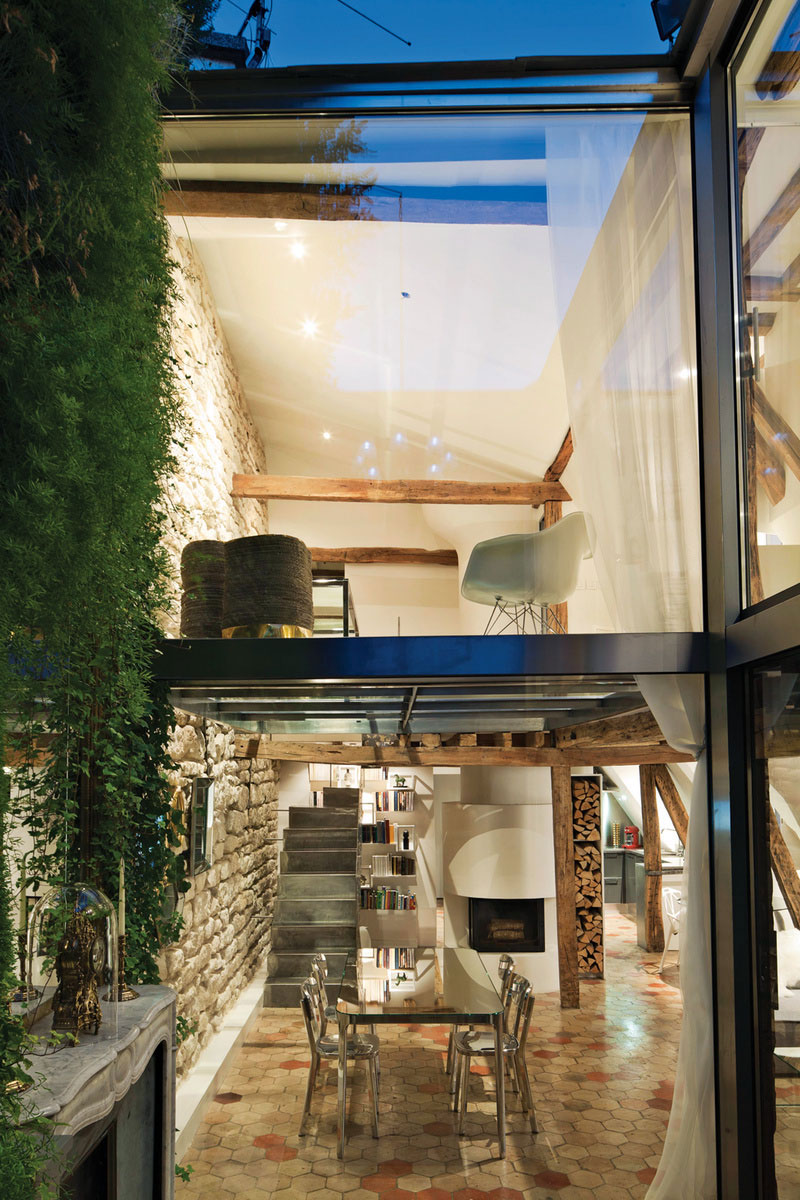 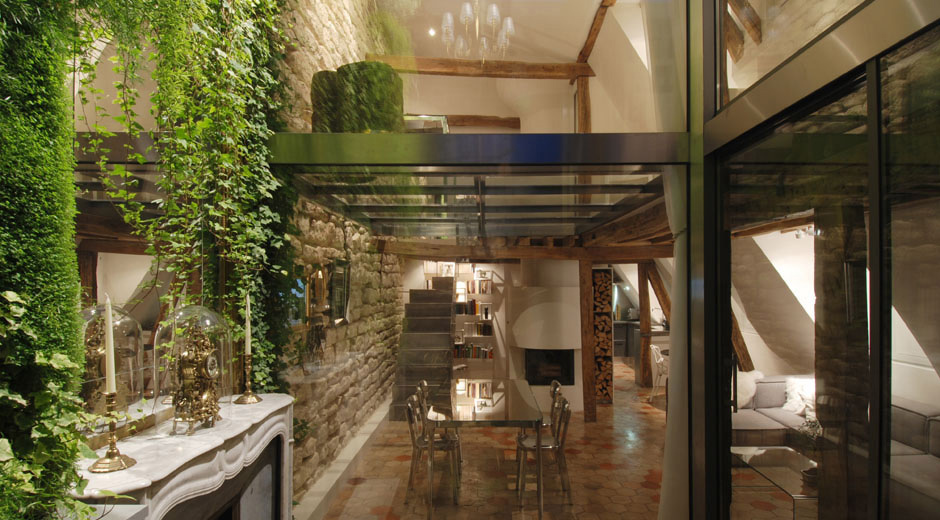 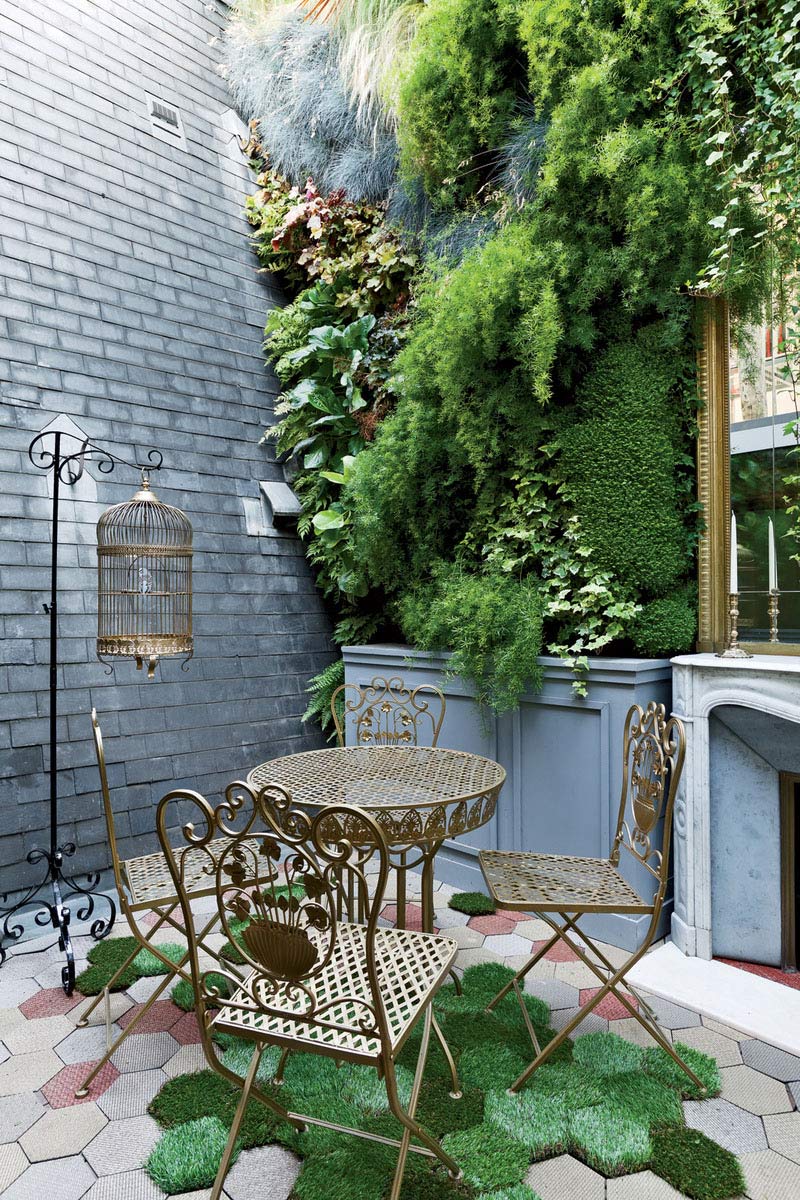 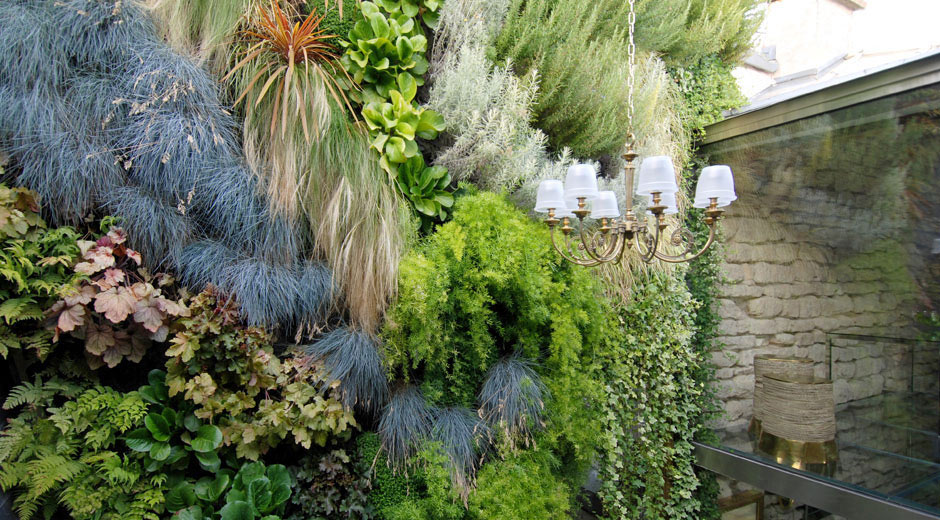 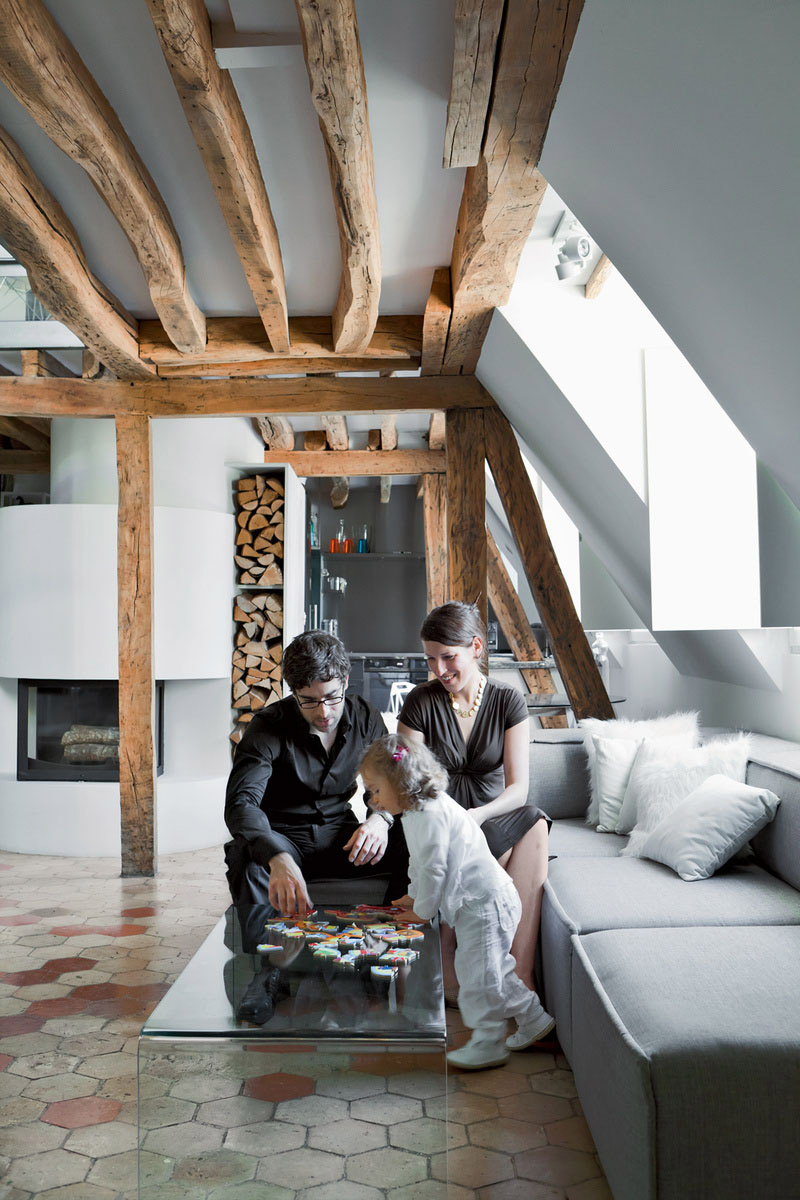 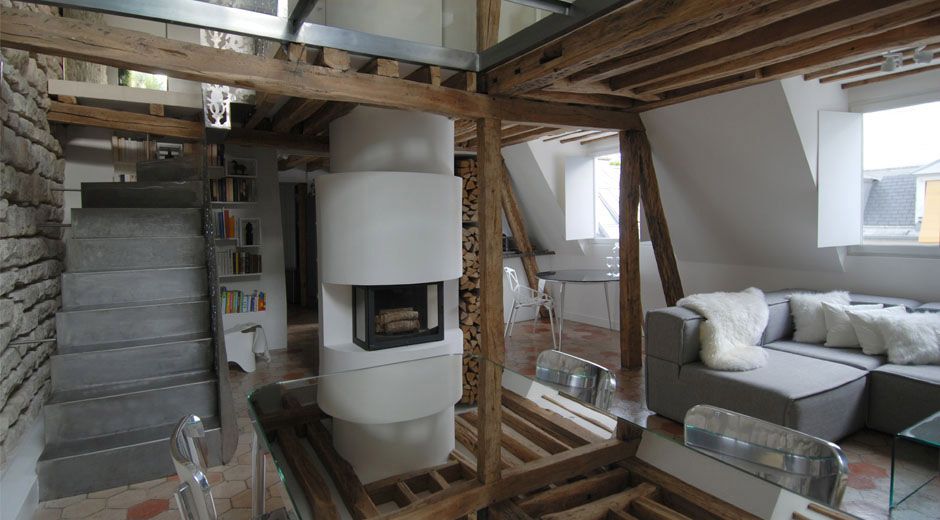 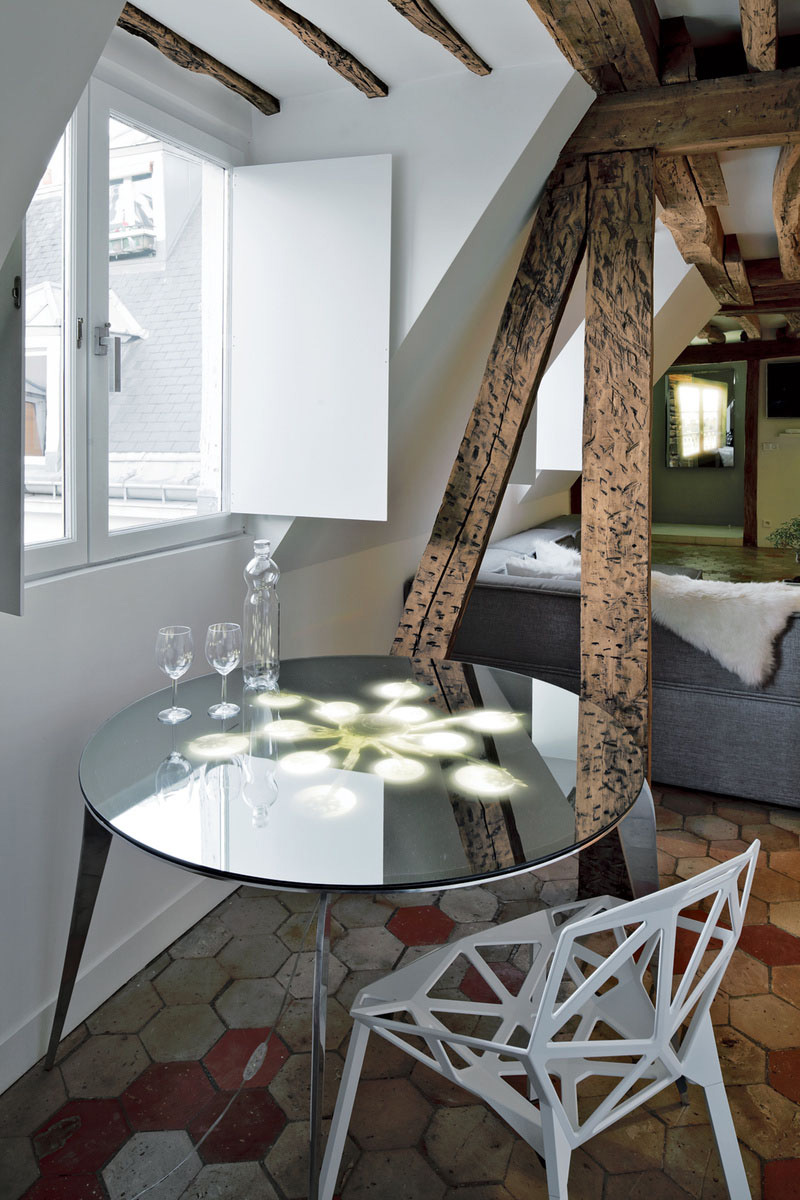 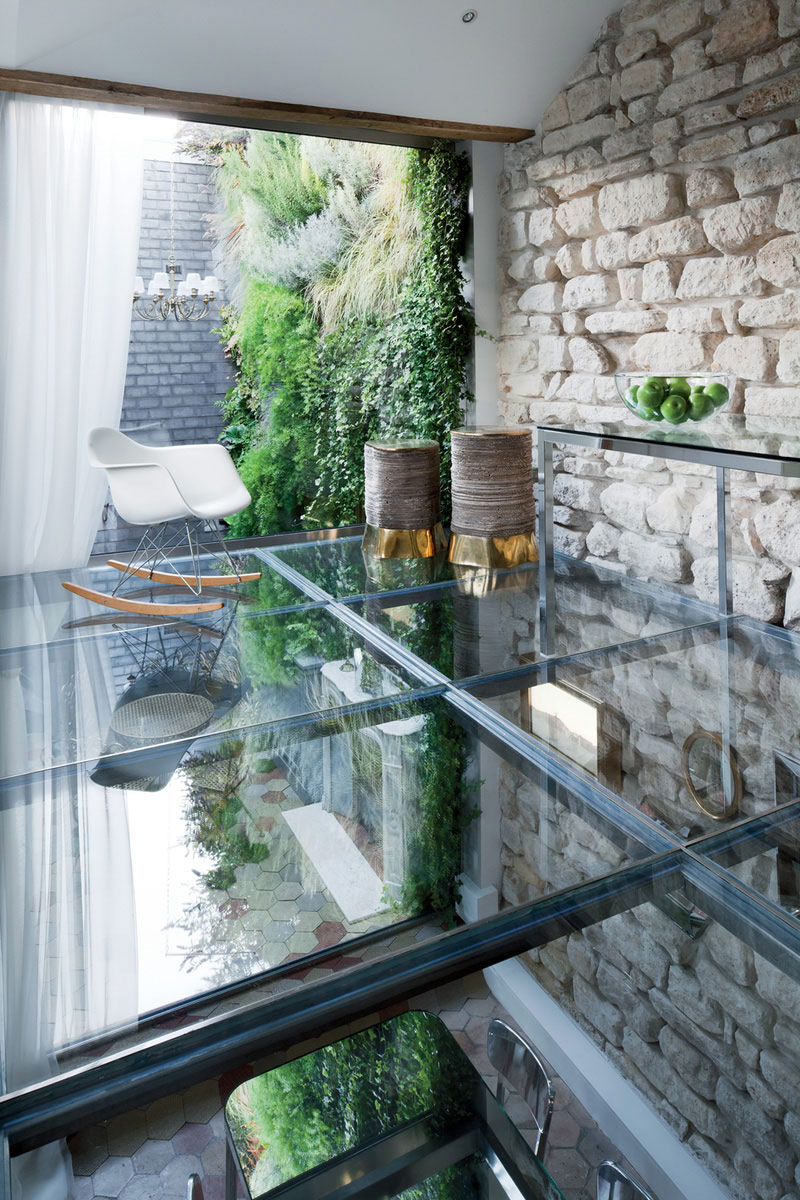 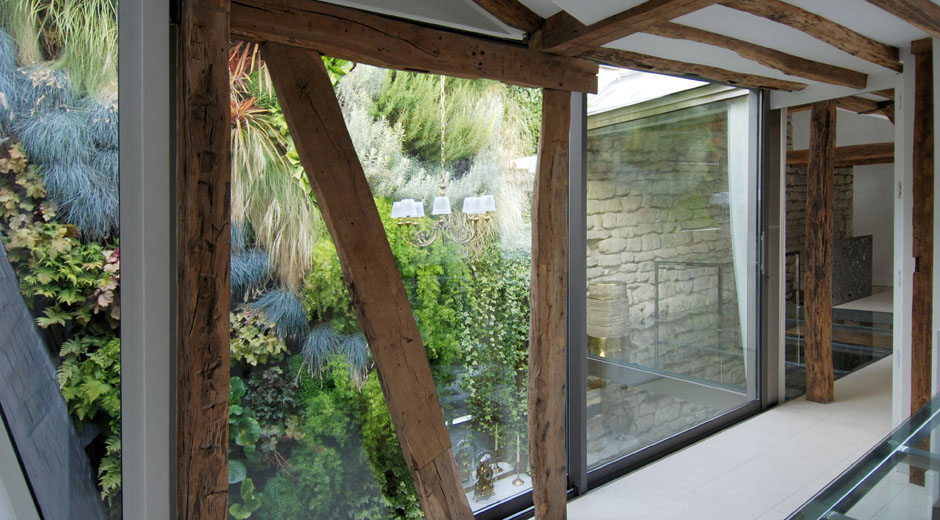 “Sitting on the top two floors by Paris’s Place de la Madeleine, this 140 m2 (1500 ft2) residence was created by unifying 12 maids’ rooms on two levels. The result is a three bedroom duplex apartment that both preserves the character of the 200 year-old building in which it is located, yet is a uniquely loft-style space in the heart of Paris. The apartment is based upon the concept of a museum: the original limestone walls and oak beams have been excavated and displayed with archaeological precision. The addition of a glass floor and walls allows each room to retain a powerful sense of openness, to be visually connected with one another and with the views of the sky and rooftops of Paris.

In one corner of the apartment there is a courtyard terrace, surrounded by five-meter tall glass walls. The terrace appears to be an interior room, containing an antique marble fireplace, mirror, and chandelier against the backdrop of the living “wallpaper” of a seven-meter tall vertical garden that rises up through the two levels of the apartment. The courtyard was conceived as a large glass display case containing a traditional salon of a mid-19th century Parisian apartment. In contrast, the interior fireplace, stair, and other details are contemporary. Inside and outside are strongly contrasted through their design while at the same time the edge between the two is blurred by the vertical garden that continues inside and the floor tiles which appear to pass through the glass and continue outside.

The apartment takes on a surreal feeling through this blurring of the edge between the interior and exterior, as well as the multiple layers of transparent and reflective glass surfaces. All of the elements in the apartment are functional, whether inside or outside, including the exterior fireplace. The use of glass is carried through the design, and includes the glass cabinets in the kitchen, and glass tiles, counters, and fixtures throughout the apartment. The three bedrooms are located on both levels at the opposite end of the apartment, served by private bathrooms, and organized around a separate courtyard.” 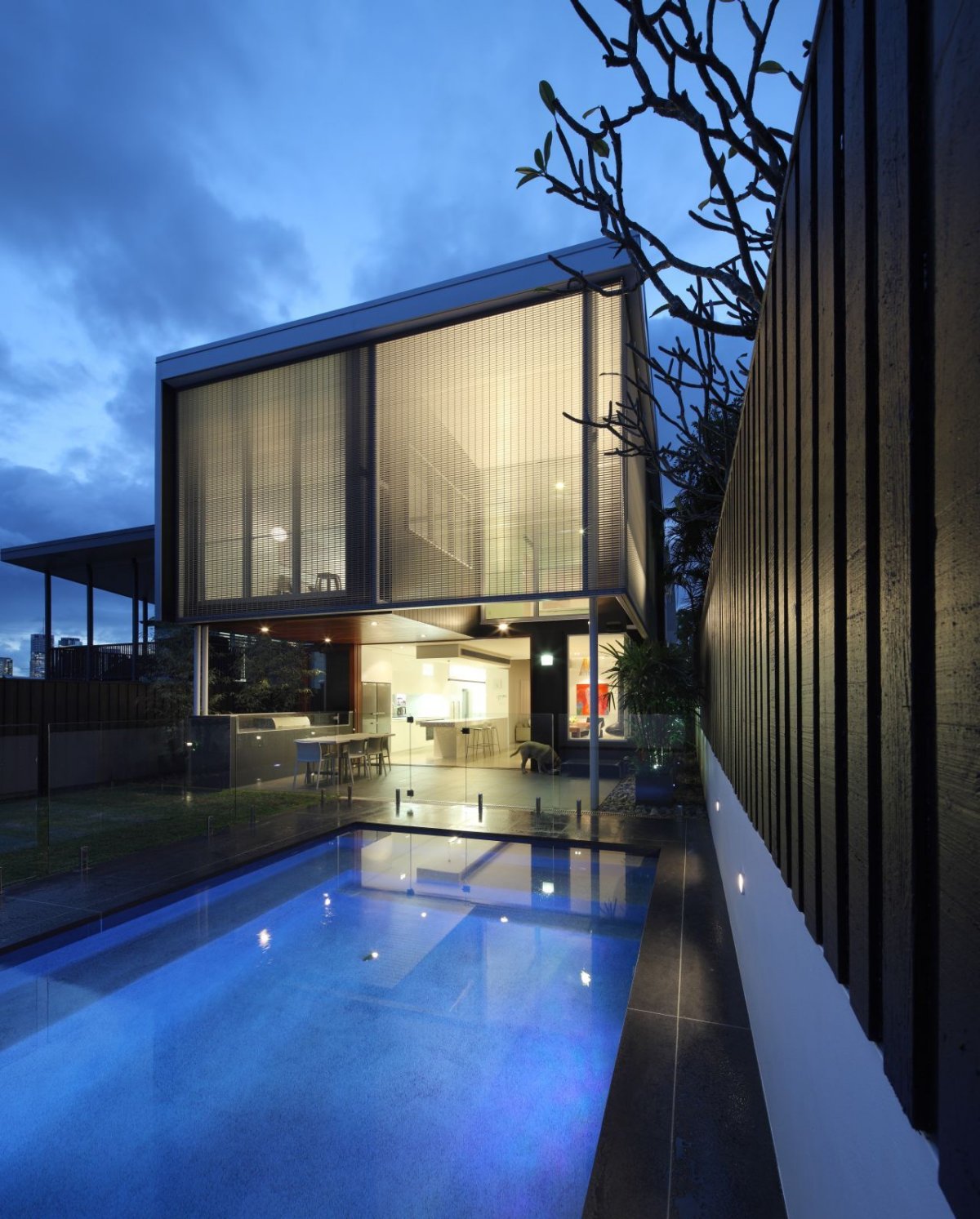 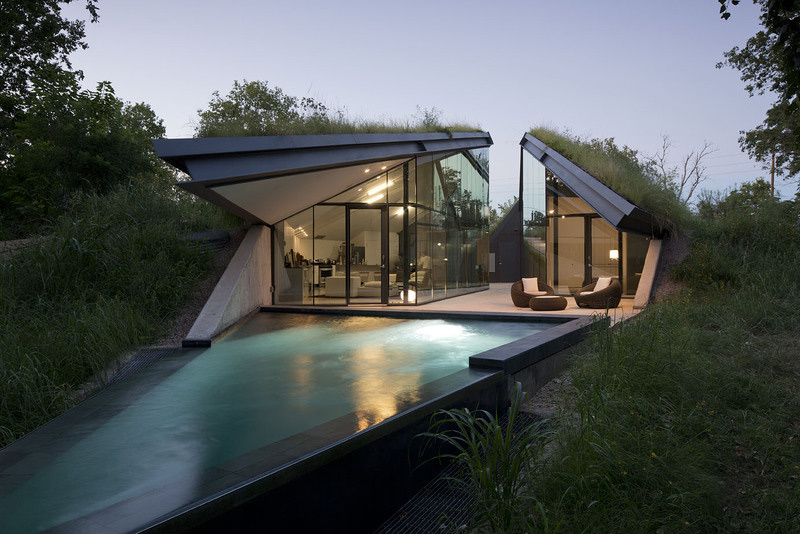 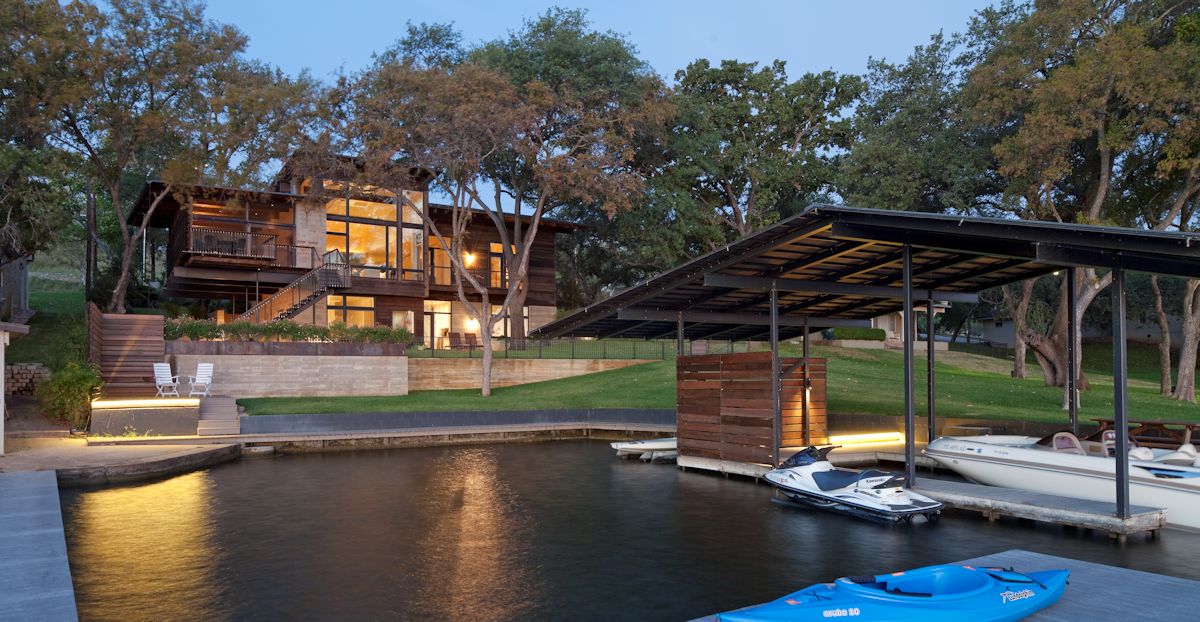 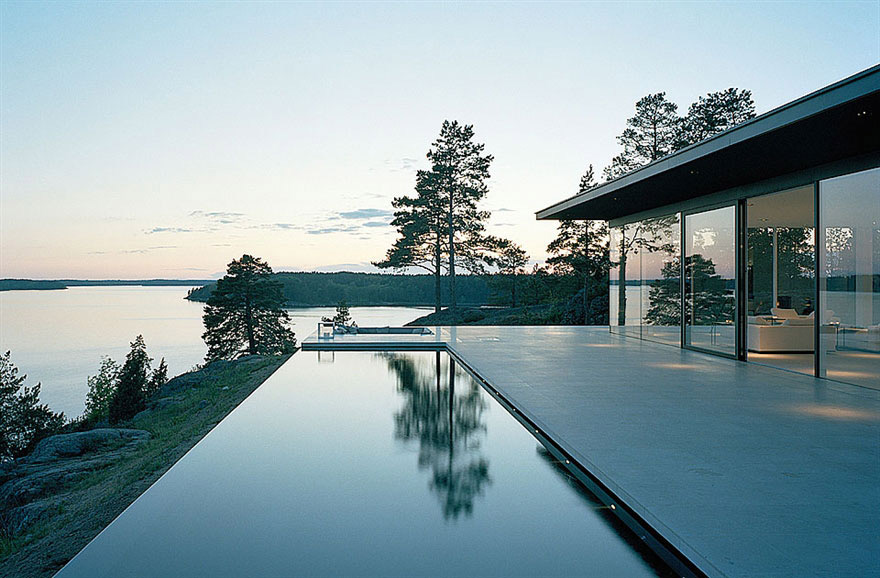 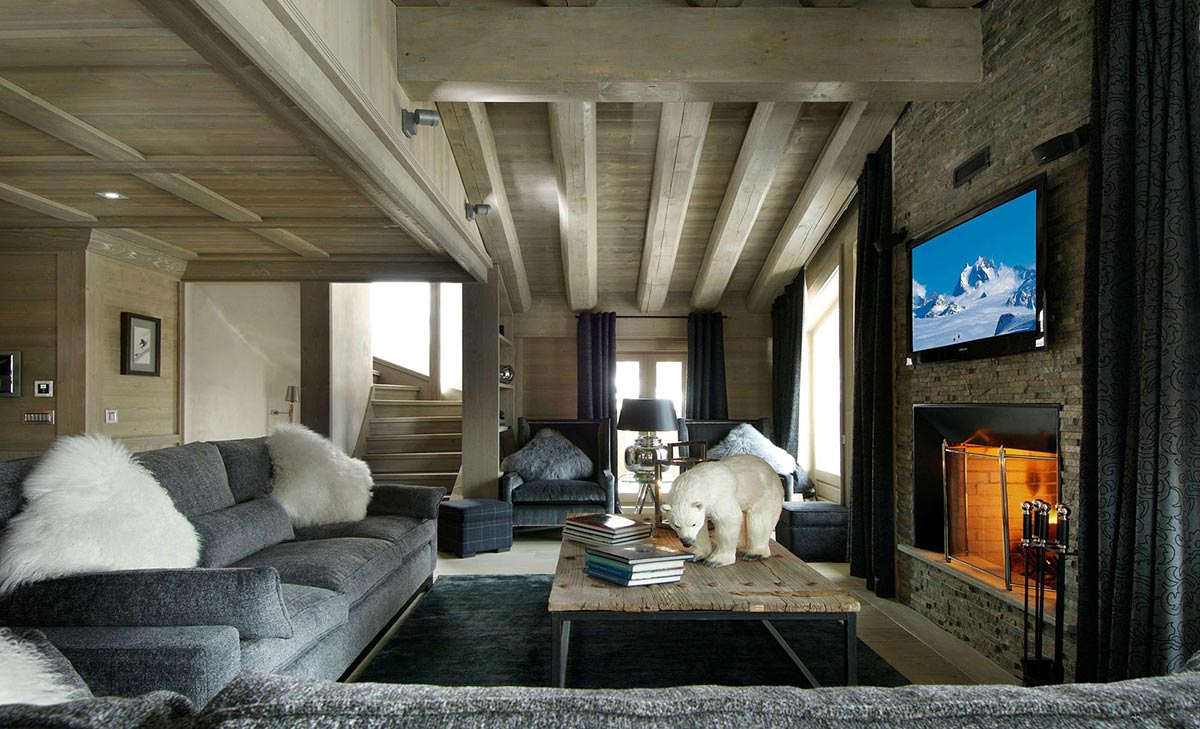 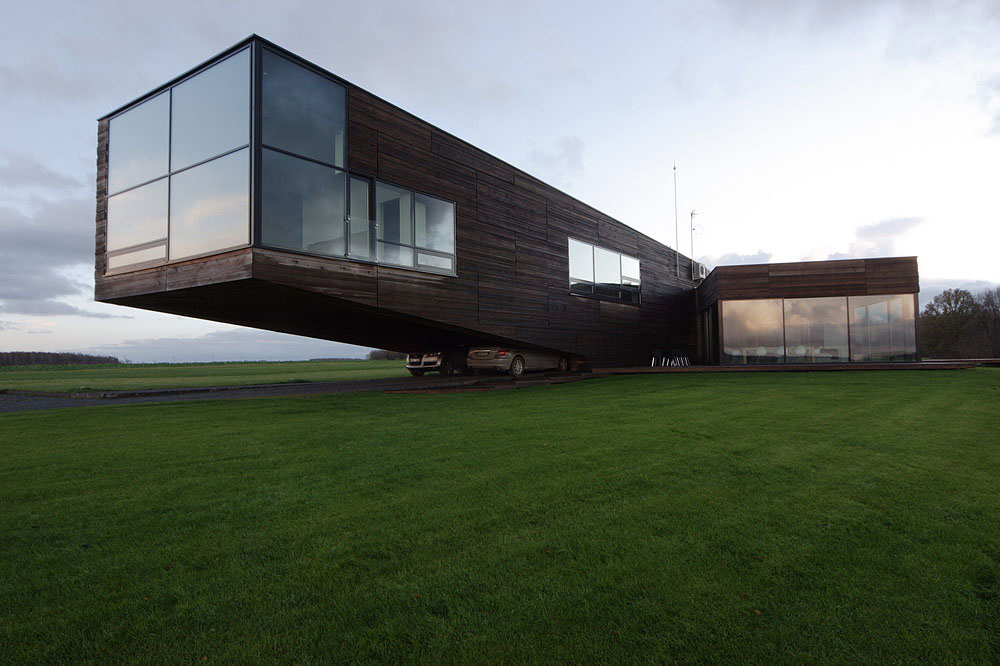